This was our second year hosting an exhibition at UPPER 751 for the Toronto Design Offsite Festival.

The Toronto Design Offsite Festival is an annual, week-long festival that celebrates the unique diversity of Canada’s energetic design scene, showcasing unexpected prototypes, immersive installations, and unique programming. The festival has been running for 5 years and has rapidly grown to include nearly 70 exhibitions and installations in 2015.

We were privileged to host some very talented local artists, designers and craftspeople who impressed not only us, but also all attendees with their creativity and skills. The exhibition included work by Bernice Lum, Chloe Gastinel-Cauvin, CTON, DB Johnson, Dudeman, GIGIDEPT, Paterson Composites, Steve Wallin and Parkdale Trading Company.

At the beginning of the festival, we were ecstatic to get a mention from Designlines http://designlinesmagazine.com/design-week-guide-2015/and Notable.ca http://notable.ca/toronto/yp-life/7-Design-Events-in-Toronto-You-Shouldnt-Miss/ as must-see shows.

The show opened on January 22 with a reception that had a packed house and rave reviews from our guests. The next day was very exciting as 2 of the pieces in our show were given Designlines Loves awards. These awards are given by the magazine editors to 100 of their favourite pieces in the festival.

Editor Tory Healy awarded the first to Paterson Composite’s Dick O’Kane chair. This Bahaus-inspired, carbon fibre chair was named after the deadliest submarine Captain in WW2 and weighed in at barely 3 pounds. http://designlinesmagazine.com/designlines-loves-2015-pt-8/.

David Dick-Agnew gave the second award to Steve Wallin’s Nathan sofa. Steve made this sofa using a solid hickory frame and full-grain Italian leather. This was his first sofa and although he plans on keeping it, custom orders are available in a variety of sizes and finishes. http://designlinesmagazine.com/designlines-loves-2015-pt-9/.

Parkdale Trading Company had their TODO debut with their La Canadiana chair. Rodrigo came across the vintage frame in a state of disrepair but saw its potential and we decided to restore it to its former beauty. We sanded and refinished the wood and polished it with Board Butter. We installed new foam for the seat and back and filled the arm cushions with down. We then upholstered the back with a piece of a vintage wool HBC blanket. The chair is as comfortable as it is beautiful and was also a hit at the show. 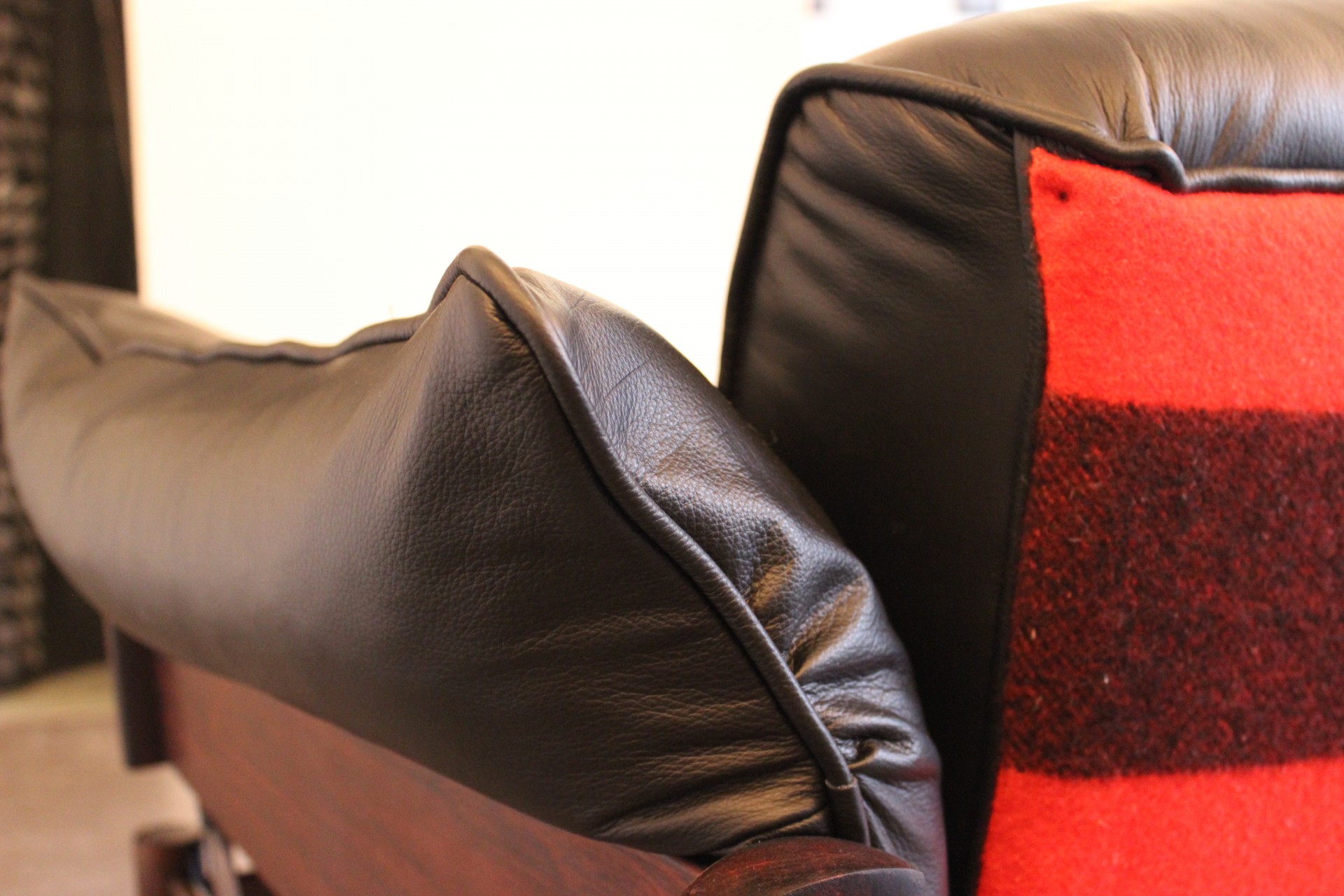 Overall the weekend was a great success and we were proud to show such great work by such awesome local talent. We're already looking forward to participating again in 2016! Here are some pictures of the exhibition.

May 25, 2022
By: kiran@cherrybombvintage.ca
We visited with our leather suppliers Perfect Leather Goods and Leather Sewing Supply Depot to get their tips and recommendations on leather care and leather care products and we’re sharing...
Read More

April 13, 2015
By: kiran@cherrybombvintage.ca
We recently completed one of our favourite chair projects for a client from Kiran's hometown of Cobourg, Ontario. He recently purchased a home outside of Warkworth that he and his Great Danes are...
Read More

March 10, 2015 (1) PUBLISHER_COMMENTS
By: kiran@cherrybombvintage.ca
This weekend we reupholstered the four shampoo chairs at W. The existing seats were covered in a blue vinyl that had seen years of wear and tear at the busy Queen West salon. In order to avoid...
Read More

March 10, 2015 (0) PUBLISHER_COMMENTS
By: kiran@cherrybombvintage.ca
Our first commercial upholstery project of 2015 was making new cushions for one of our favourite cafés, R2. Located just across the street from UPPER 751, their friendly service and amazing...
Read More
[ View All ]